Objective: A study was conducted in March 2019 to compare the consistency and accuracy of bracket placement between the virtual digital placement using OrthoSelect DIBS software and the actual placement on patients’ dentition using the company’s 3D-printed transfer appliances.

Methodology: Twenty-three patients between the ages of 11 and 16 were enrolled and 446 brackets were ultimately placed during the study. A post-placement scan was also conducted, and deviations were evaluated using CAD software.

Results: Based on post-placement scans, 97.3% of the deviations in bracket placement fell within the clinically acceptable range of 0.5 mm, with an overall mean deviation of just 0.121 mm.

Conclusion: Based on the data from this study, the DIBS platform (including digital modeling, transfer trays and bracket bonding) provides a highly accurate protocol for bonding brackets to patients’ dentition.

Various approaches to indirect bonding have been developed, with varying levels of effectiveness and
accuracy. The purpose of this study is to assess the DIBS by OrthoSelect indirect bonding technique and compare its predicted bracket placement as determined by its software-based setup system against actual bracket placement using the company’s 3D-printed transfer trays in a real-world (in vivo) setting.

Twenty-three orthodontic patients of four different independent orthodontic practices were enrolled in a study of bracket placements. Selected patients constituted a mix of genders and ages ranging from 11 to 16 years old. The provisions of the Helsinki Declaration were followed in this study to protect test subjects. All patients, and/or their legal guardians, also signed informed consent forms.

Digitized images of each patient’s teeth were created using a variety of commercially available intraoral scanners. These images were then saved as STL files and downloaded into the DIBS software to create digital models of the respective dentition. The software algorithms were then used to create desired virtual bracket positions on each of the teeth to be treated. In seven of the cases, individual orthodontists opted to just place brackets on one arch rather than both.

After each digital case setup was completed and approved by the orthodontist, indirect bonding trays were 3D printed by OrthoSelect in the company facilities and loaded with the appropriate brackets for each patient. The trays were then returned to the orthodontists for placement on their patients’ teeth.

After the brackets were placed, light cured and trays removed, a second intraoral scan was completed on each patient to create a 3D model of the patients’ dentition with brackets in place. This second 3D in vivo model was then compared to the original digital model produced by the DIBS software using AutoCAD software from Autodesk Inc. to determine deviation in virtual vs actual bracket placement.

A total of 446 brackets were placed on patients’ teeth as part of this study. As such, 892 measurements were made (446 vertical and 446 horizontal) comparing predicted vs actual placement outcomes across the 23 patients and against the clinically accepted deviation range of 0.5 mm. 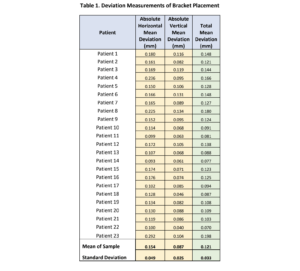 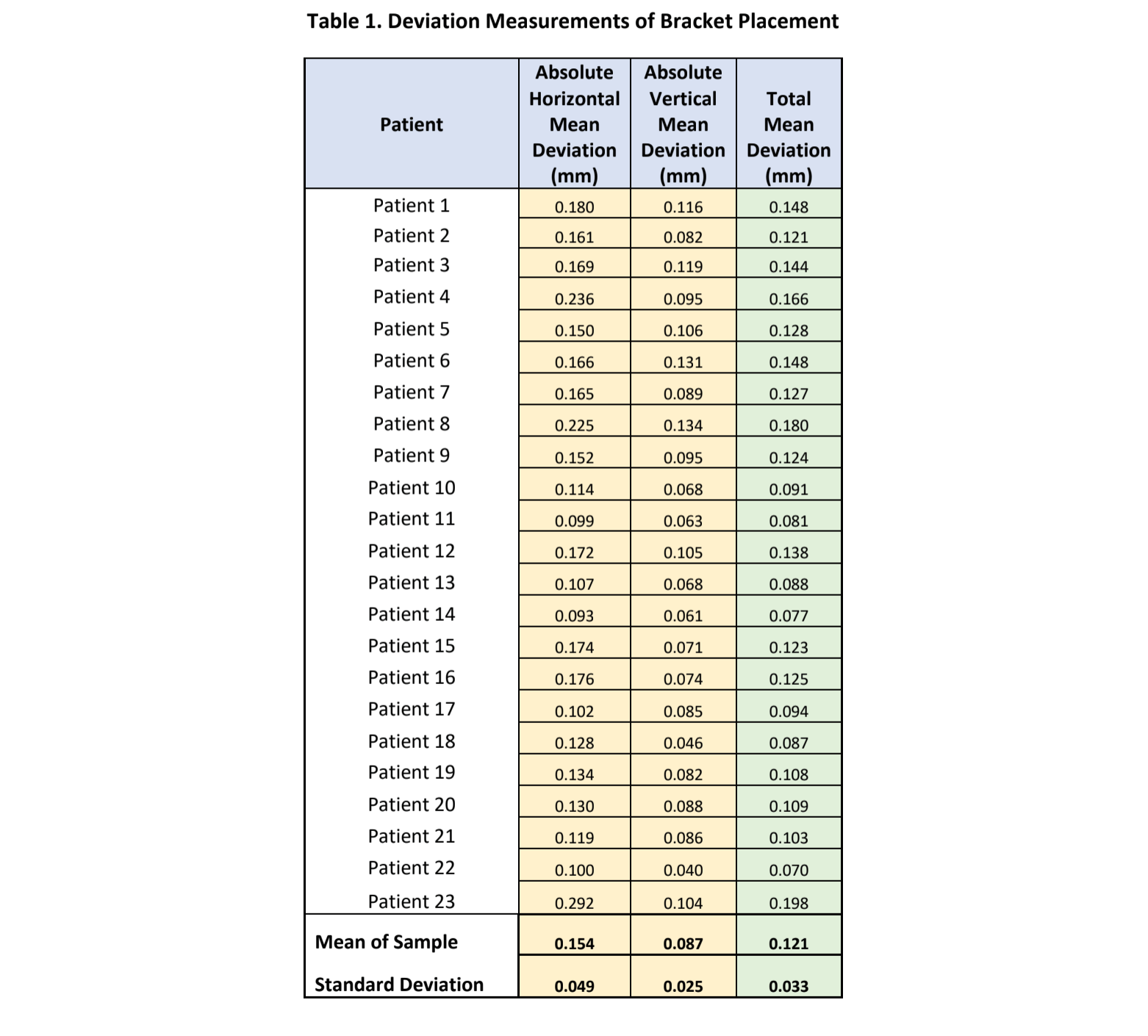 In the 12 instances where bracket placement fell outside the acceptable range of 0.5 mm, several possible explanations may apply:

While larger variances certainly warrant further investigation, the overall low misplaced bracket incidence rate of only 2.7% in this study does not appear to indicate a systemic issue.

Overall, based on the data from this study, the DIBS platform (including digital modeling, transfer trays and bracket bonding) appears to provide a highly accurate protocol for bonding brackets to patients’ dentition.

CAD created and 3D printed, the Owen Tripod Splint is designed for fit and built for comfort and durability.

The Owen Splint is designed for use on both arches and has 3 raised surfaces (the tripod) that allows a doctor to quickly and easily adjust for the patient. With Splints on both the upper and lower the jaw is allowed to naturally skate and move.

The Owen Tripod Splint is for heavy grinders and is extremely durable because of the splint- on-splint design. Minimal thickness is 1.4mm with additional buildup on the occlusal surfaces which are virtually flat. The material used is very strong, yet flexes slightly as the patient grinds.

CAD created and 3D printed, the OrthoSelect Standard Splint is designed for fit and built for comfort and durability.

We use digital articulation with a slight anterior canine guidance as well as slightly varied surface to accommodate cusp tips and deliver balanced contact to support existing tooth position and natural jaw movement (or “skating”).

Minimal thickness is 1.4mm with additional buildup on the occlusal surfaces. The material used is very strong, yet flexes slightly as the patient grinds.